(CORE Series) Variations on a theme by G. Dantzig: Revisiting the principles of the Simplex Algorithm 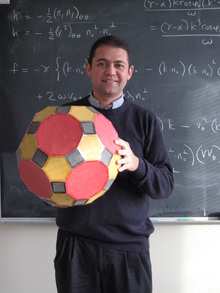 ABSTRACT:
Linear programs (LPs) are, without any doubt, at the core of both the theory and the practice of modern applied and computational optimization (e.g., in discrete optimization LPs are used in practical computations using branch-and-bound, and in approximation algorithms, e.g., in rounding schemes).  Fast algorithms are indispensable.

George Dantzig's simplex method is one of the most famous algorithms to solve LPs and SIAM even elected it as one of the top 10 most influential algorithms of the 20th Century. But despite its key importance, many simple easy-to-state mathematical properties of the simplex method and its geometry remain unknown. The geometry of the simplex method is a topic in the convex-combinatorial geometry of polyhedra. Perhaps the most famous geometric-combinatorial challenge is to determine a worst-case upper bound for the graph diameter of polyhedra.

In this talk, I will look at how abstractions of the simplex method provide useful insight into the properties of this famous algorithm. The first type of abstraction is to remove coordinates entirely and is related to combinatorial topology, the second is related to generalizing the pivoting moves. This survey lecture includes joint work with Steve Klee, Raymond Hemmecke, and Jon Lee.

His research covers a wide range of topics, including Combinatorics, Algorithms, Convex Geometry, Applied Algebra, and Optimization. In 2004 he received an Alexander von Humboldt Fellowship and won the 2010 INFORMS computer society prize for his work in algebraic algorithms in Optimization.  For his contributions to Discrete Geometry and Combinatorial Optimization, as well as for service to the profession, including mentoring and diversity, he was elected a fellow of the American Mathematical Society in 2014. For his mentoring and teaching he received the 2013 Chancellor's award for mentoring undergraduate research and, in 2017, the Mathematical Association of America Golden Section Teaching Award. He has supervised twelve Ph.D students, and over 50 undergraduates research projects. He is currently an associate editor for SIAM Journal of Discrete Mathematics, SIAM Journal of Applied Algebra and Geometry, and the Boletin de la Sociedad Matematica Mexicana.