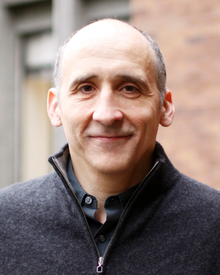 The Simons Foundation has announced that Sándor Kovács is one of the 2014 Simons Fellows in Mathematics. The fellowship program, which began in 2012, is designed to provide awardees with additional sabbatical funding in order to "increase creativity and provide intellectual stimulation." Tatiana Toro was one of the inaugural fellows two years ago, with Hart Smith and Gunther Uhlmann joining her last year.