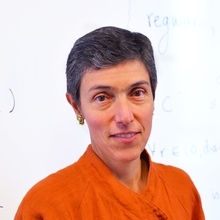 An article highlighting Tatiana Toro's research was recently featured in the 2012 Annual Report from the Simons Foundation. Toro was named a 2012 Simons Fellow in Mathematics for her research on geometric measure theory and its relation to variational problems that yield a partial differential equation and an associated free boundary.