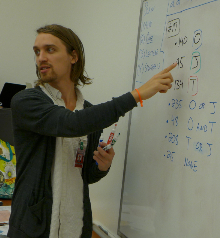 Matt Junge, a graduate student who received the department's Excellence in Teaching award in 2011, is featured in the current newsletter of the Freedom Education Project Puget Sound for a year-long college prep course he is offering at the Washington Correction Center for Women. With the resumption of his class earlier this month, one student declared, "The break was way too long. Can we start the semester earlier next time?" Matt, who studied math and philosophy as an undergraduate at UW, is serving the department this year as Lead TA while continuing his research in probability.