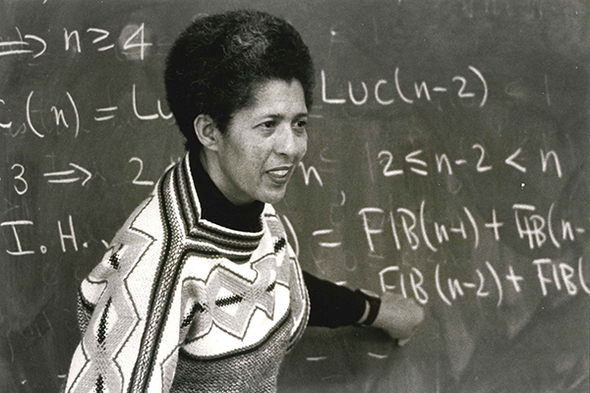 Dr. Gloria Conyers Hewitt
In mid-March, the Gloria Hewitt Endowed Graduate Student Support Fund was established with an initial principal of $50,000 in order to “promote excellence in the graduate program of the Department of Mathematics, in particular enhancing efforts to achieve a more equitable representation of those under-represented in the field of mathematics.’’ Dr. Hewitt is among the first African-American women in the US to receive a PhD in mathematics. Should the principal (through growth or new gifts) reach the minimum threshold for a graduate fellowship, which is currently set at $100,000, the endowment will become the Gloria Hewitt Endowed Graduate Fellowship, to be awarded “with a preference for students who contribute to the goal of a more equitable representation of under-represented minorities and women in the field of mathematics.”
Gifts to the endowment can be made here.
Gloria received her PhD from UW under the supervision of Dick Pierce in 1962, making her the sixth African-American woman to earn a PhD in mathematics. She took a faculty position at the University of Montana in 1961 and remained there until her retirement in 1999, serving as chair from 1995 to 1999. Gloria was also involved in a number of national mathematical organizations and activities. She was a member of the Board of Governors of the Mathematical Association of America, played a major role in the writing of the AP calculus exam and the mathematical portion of the GREs, and served on the executive council for the mathematical honor society, Pi Mu Epsilon.
A first step toward departmental recognition of Gloria was taken in the spring of 2016, when we received a current-use gift from the Washington Research Foundation to support programs in the department. With their approval, I designated any funds used for graduate support to be named for her. Last October, Edray Goins of Purdue University came to Seattle to give a colloquium talk. Edray is the president of the National Association of Mathematicians, which was founded in 1969 to support African-American mathematicians and now has the broader mission of promoting the mathematical development of all underrepresented minorities. I told Edray about Gloria and mentioned my interest in visiting her in Missoula to honor her. A few days later, Edray offered to join me there on behalf of NAM. After a conversation with Gloria to get her approval of the visit, I began to explore the possibility of establishing a permanent endowment for her, as well as collaborating with the Department of Mathematical Sciences at the University of Montana on a day to honor her. All this came to fruition on March 19.
That afternoon, in Missoula, Edray gave a colloquium talk that began with overviews of NAM and of the first six African-American women to receive mathematics PhDs. At a reception following the colloquium, I talked about Gloria and the establishment of our new endowment. The University of Montana has also established a graduate scholarship in Gloria’s name, and some UM speakers provided the details, while others fondly reminisced about their time with Gloria. The final speaker, pictured below, was Gloria herself. In the spirit of the day, she recounted her fundraising success as department chair two decades ago. 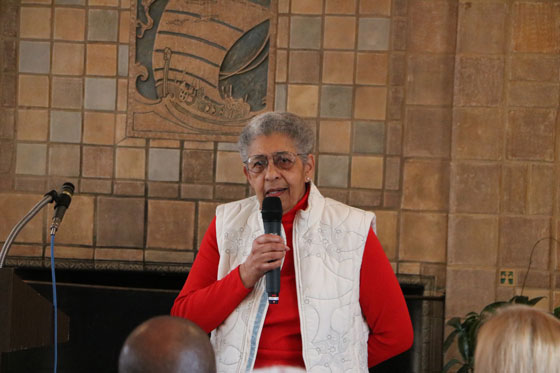 Following Gloria's remarks, people gathered around to chat with her. I was able to steal her for a moment to pose for the photo below with UM department chair Emily Stone and me on the left, and with Gail (my wife) and Edray on the right.
-Ron Irving 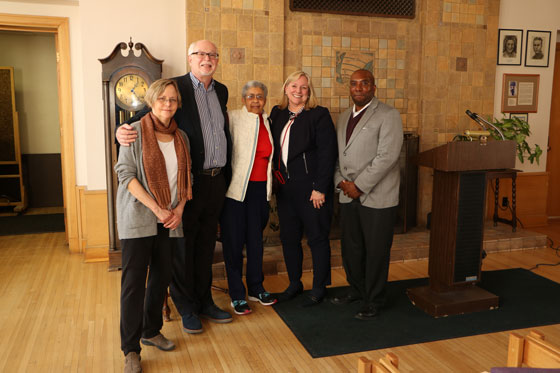