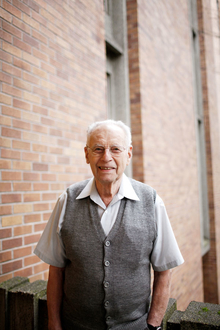 Professor Emeritus Branko Grünbaum died on September 14, 2018, in Seattle.  Born in 1929 in what is now Croatia, Branko began his studies at the University of Zagreb.  On emigrating to Israel, he continued at the Hebrew University in Jerusalem, from which he received his PhD in 1957.  Branko came to the University of Washington in 1966 after spending time at the Institute for Advanced Study, Hebrew University, and Michigan State.  Branko’s classic monograph Convex Polytopes was recognized last spring, on the occasion of its 50th anniversary, by an article in the May issue of the Notices of the American Mathematical Society.  Among many honors, Branko received the Leroy P. Steele Prize for Mathematical Exposition from the AMS in 2005 for the book.  The citation states that “much of the development that led to the present, thriving state of polytope theory owes its existence to this book, which served as a source of information for workers in the field and as a source of inspiration for them to enter the field.”