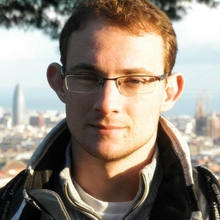 Dmitriy Drusvyatskiy received his PhD from Cornell's School of Operations Research and Information Engineering in 2013, and then spent a postdoctoral year at the University of Waterloo in their Department of Combinatorics and Optimization. He arrived at the University of Washington as an assistant professor in Autumn 2014. His promotion to associate professor with tenure became effective in September 2019.

Dmitriy has received a number of awards since joining UW, including the Air Force Office of Scientific Research Young Investigator Award, a National Science Foundation CAREER award, and the 2019 Young Researchers Prize of the INFORMS Optimization Society. He is currently a co-PI of an NSF-funded Transdisciplinary Research in Principles of Data Science institute at the University of Washington that brings together researchers across campus.

Dmitriy’s general area of expertise is mathematical optimization, which develops theory and algorithms for selecting decision variables so that a given cost function is as small as possible. The subject has roots going back centuries, but crystalized in its modern form through the work of George Dantzig and others during and after World War II. Our department has had its own distinguished history in the field, going back to the work of Victor Klee and Terry Rockafellar.

Over the past twenty years, the ﬁeld of optimization has experienced explosive growth, with driving factors including the internet, advances in computational power and computing architectures, and the availability and importance of very large data sets in science, medicine, engineering, and communication. The recent advances in data science and engineering, as well as advances in artificial intelligence, critically depend on a synthesis of new ideas from statistics, computer science, and optimization. Dmitriy’s research broadly lies within this body of work, with the core aim of advancing the foundations of large scale computing and data science through the lens of optimization.