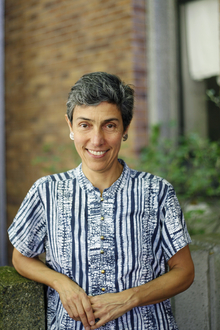 Tatiana Toro has been named a member of the American Academy of Arts & Sciences, one of only 5 new members in Mathematics, Applied Mathematics, and Statistics this year. Her research centers on the premise that objects, which may at first appear irregular or disordered, actually have regular features that are quantifiable. Toro's work spans geometric measure theory, harmonic analysis, and partial differential equations. Toro studies the mathematical questions that come up in systems where the known data are "rough," as well as interfaces that arise in "noisy" minimization problems.

In addition to her research, Toro has also worked to increase diversity in mathematics. She helped launch Latinx in the Mathematical Sciences, including two conferences through the National Science Foundation highlighting the achievements of Latinx mathematicians.

Toro joined the UW faculty in 1996 and her career includes numerous honors and accolades. Last year, she received the UW’s Marsha L. Landolt Distinguished Graduate Mentor Award. In 2017, she was elected as a Fellow of the American Mathematical Society. Toro has also been a Guggenheim Fellow, an Alfred P. Sloan Research Fellow and a Simons Foundation Fellow.

Founded in 1780, the American Academy of Arts and Sciences is one of the country’s oldest learned societies and independent policy research centers, convening leaders from the academic, business and government sectors to respond to the challenges facing the nation and the world.

The new members join the company of Academy members elected before them, including Benjamin Franklin and Alexander Hamilton in the eighteenth century; Ralph Waldo Emerson and Maria Mitchell in the nineteenth; and Robert Frost, Martha Graham, Margaret Mead, Milton Friedman, and Martin Luther King, Jr. in the twentieth.