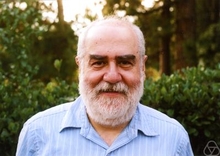 The 2021 AMS-SIAM George David Birkhoff Prize in Applied Mathematics was awarded to Gunther Uhlmann for his fundamental and insightful contributions to inverse problems and partial differential equations, as well as for his incisive work on boundary rigidity, microlocal analysis and cloaking. Uhlmann’s work is distinguished by its mathematical beauty and relevance to many significant applications, especially in medical imaging, seismic prospecting and general inverse problems.

Given every three years, the Birkhoff Prize is awarded jointly by the AMS and the Society for Industrial and Applied Mathematics (SIAM) for an outstanding contribution to applied mathematics in the highest and broadest sense. The prize will be recognized during the 2021 Virtual Joint Mathematics Meetings in January.

I would like to thank the AMS and the Society for Industrial and Applied Mathematics (SIAM) for the great honor of being named the recipient of the 2021 George Birkhoff Prize in Applied Mathematics. Several of the previous recipients of the award are some of my mathematical heroes. I would like to also thank my collaborators, graduate students, and postdocs, who have enriched my life both professionally and personally.

Many people were very influential early in my career and I can mention only a few. Nicolas Yus was my undergraduate mentor in Chile and I owe him my thanks for his great support and teaching. Warren Ambrose made it possible for me to go to graduate school at Massachusetts Institute of Technology (MIT), and he was a continuous source of support and encouragement, especially in my early years in the United States. Herbert Clemens also helped me to come to the United States, and he has been an example to emulate in my life. My PhD advisor Victor Guillemin taught me so much—he has a contagious enthusiasm for mathematics. Richard Melrose shared with me many times his great insight, and he has been a true friend. I met Alberto Calderón during my graduate studies at MIT; he is one of my mathematical heroes, such an original mathematician. Norberto Kerzman was also very supportive and encouraging during my graduate studies and we became friends. The year I was at Courant, I had the great fortune of meeting Louis Nirenberg. He taught me many things in mathematics and was one of the kindest people I have ever met—a wonderful role model for anybody to follow. I also treasured the friendship I started with Cathleen Morawetz during my stay at Courant.

Most of all I have had the unwavering support of my family, my late wife Carolina, my daughter Anita, and my son Eric. Without them this would not have been possible. Carolina would have been so proud. This prize is dedicated to our five grandchildren Thomas, Eli, Louis, Charlie and little Carolina. They are my joy.

Read more on the College of Arts & Sciences News archive