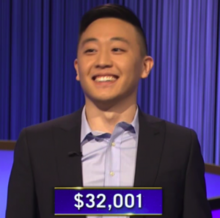 Robert Won defeated returning champion Brian Ahern and contestant Leigh Jahnig on the July 8th episode of Jeopardy! by a close victory. On a behind-the-scenes clip of the episode, he expressed his anxiety: “I was terrified that I’m a math professor and I wagered wrong. Like if I lost on a wrong wager my colleagues wouldn’t let me hear the end of that.” He will be defending his title on the next episode scheduled to air on July 11th.

Robert Won is currently an Assistant Professor in the Department of Mathematics at George Washington University.