From Polynomials to Humanoid Robots 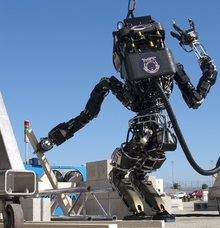 The last few years have seen absolutely incredible advances in the field of robotics, with massive new investments from major companies including Google, Apple, and Uber. At the heart of these advances are algorithms, often using mathematical optimization, which allow our machines to better interpret massive streams of incoming data, to decide how and where to move, and even to balance and not fall down while they are executing those plans. In this talk, I'll describe some of those advances in the context of a controlling a 400lb humanoid robot in a disaster response scenario and an airplane that can dart through a forest at 30 mph. And I'd like to send a clear message -- there is still a lot of work to be done! Even small improvements in our mathematical foundations, such as the algorithms which check if a polynomial is uniformly greater than zero, can make our robots more capable of moving through the world.

Russ Tedrake is the X Consortium Associate Professor of Electrical Engineering and Computer Science, Aeronautics and Astronautics, and Mechanical Engineering at MIT, the Director of the Center for Robotics at the Computer Science and Artificial Intelligence Lab, and the leader of Team MIT's entry in the DARPA Robotics Challenge. He is a recipient of the NSF CAREER Award, the MIT Jerome Saltzer Award for undergraduate teaching, the DARPA Young Faculty Award in Mathematics, the 2012 Ruth and Joel Spira Teaching Award, and was named a Microsoft Research New Faculty Fellow.

Russ received his B.S.E. in Computer Engineering from the University of Michigan, Ann Arbor, in 1999, and his Ph.D. in Electrical Engineering and Computer Science from MIT in 2004, working with Sebastian Seung. After graduation, he joined the MIT Brain and Cognitive Sciences Department as a Postdoctoral Associate. During his education, he has also spent time at Microsoft, Microsoft Research, and the Santa Fe Institute.