Connections and Reconnections: A Link Between Mathematics, Physics and DNA 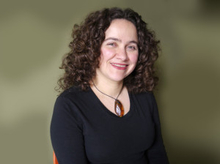 What does a smoke ring have in common with the way DNA recombines? Both are examples of modeling reconnection events, which are common in biology and in physics. In biology, chromosomal rearrangements may arise from errors in DNA replication, from radiation damage or in cancer. In this talk we show how a combination of tools from pure math, computer simulations and visualization are used to analyze reconnection data.

Mariel Vazquez is Professor of Mathematics, and of Microbiology & Molecular Genetics at the University of California Davis. She is a mathematical biologist whose research focuses on the applications of topological and discrete methods to the study of DNA, with an emphasis on the topological changes affected by enzymes such as topoisomerases and site-specific recombinases, as well as on the study of chromosomal rearrangements in radiation cytogenetics and cancer, and of processes of DNA packing. Her contributions are characterized by the use of tools from pure mathematics (knot theory, low-dimensional topology, graph theory) to the study of important biological questions. Her work, often collaborative, has provided keen insights in the packing of DNA and in the mechanism of enzymes involved in DNA replication and DNA repair.

Mariel obtained her PhD in Mathematics in 2005 from Florida State University, where she worked with De Witt Sumners. In 2018 she was selected to the inaugural class of fellows of the Association for Women in Mathematics, is recipient of the 2016 Blackwell-Tapia Prize, a 2014 CAMPOS scholarship at UC Davis, the 2014 Mohammed Dahleh Distinguished Lectureship at UC Santa Barbara, a 2012 U.S. Presidential Early Career Award for Scientists and Engineers (PECASE), and a 2011 NSF CAREER Award. The PECASE honored her “for excellent interdisciplinary and international research at the interface of mathematics and biology, and for creativity and dedication to recruiting, training, and mentoring, and helping students from underrepresented groups achieve their goals.” Mariel has given plenary talks at the 2017 PRIMA Meeting, the 2017 Association for Women in Mathematics Research Symposium, the 2015 Latinos in the Mathematical Sciences Conference, the 8th Australia-New Zealand Mathematics Convention (2014), and the 2012 SIAM Life Sciences Meeting. She was also the 2015 Dorothy Wrinch Endowed Lecturer in Biomathematics (Smith College), the 2014 Mohammed Dahleh Distinguished Lecturer (UCSB), the 2014 Distinguished PIMS Lecturer in Mathematical Biology (University of Saskatchewan).