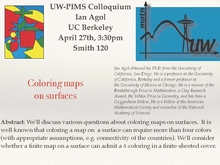 We'll discuss various questions about coloring maps on surfaces. It is well-known that coloring a map on a surface can require more than four colors (with appropriate assumptions, e.g. connectivity of the countries). We'll consider whether a finite map on a surface can admit a 4-coloring in a finite-sheeted cover.